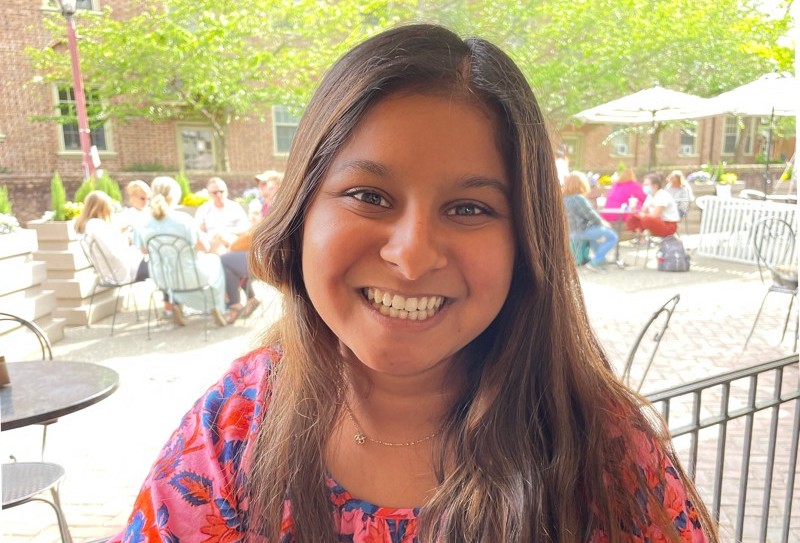 Sonia Kinkhabwala, a sociology major with a minor in management and organizational leadership, was the recipient of the 2021 Algernon Sydney Sullivan Award at Sullivan Foundation partner school William & Mary in Williamsburg, Va.

As a student, Kinkhabwala’s longtime concern for the welfare of senior citizens led her to co-found Intergenerational Insights. At a time when seniors were particularly vulnerable to COVID-19 and the isolation that resulted from it, the program recruited more than 150 students to be pen pals with residents of Williamsburg-area senior living communities.

Prior to the pandemic, Kinkhabwala had been involved with a project focused on understanding intergenerational relationships as part of the undergraduate think tank Civic Agency Project, which explores the problem of civic engagement and democratic leadership. When she launched Intergenerational Insights in the spring of 2020, Kinkhabwala, like so many college students around the country, was taking classes remotely from home.

“When the COVID-19 crisis began, I couldn’t think about the idea of civic agency without thinking about COVID-19,” Kinkhabwala said. “So I decided to pivot my project a bit and create a pen-pal program between W&M students and residents at the Patriots Colony military retirement community in Williamsburg.”

As more students got involved in the program, additional retirement communities were added to the program. To ensure that the students’ letters went to residents who needed them most, each initial letter was sent to a resident programming director at the writer’s assigned retirement community. The director then passed along the letter to a resident who was particularly in need of social connection. The resident then had the chance to respond to the student, beginning the pen-pal relationship.

At the time the pen-pal program launched, Kinkhabwala said she envisioned it “as a means for mutual support during a difficult, straining time for all.” She added, “As older adults are at a heightened risk of social isolation and contracting the virus, we also see this as a way to show up and stay connected to a vulnerable population in our community even if we cannot be physically present.”

Kinkhabwala was also an outreach fellow for W&M’s Alan B. Miller Entrepreneurship Center. While there, she was involved in numerous ventures, including launching a podcast series that encouraged students to start each day with reflection and self-direction. Meanwhile, she was a constant presence in W&M’s Office of Community Engagement and was involved with the Aim 4 civic leadership program for four years. In addition, she consistently volunteered during service days and served with the Branch Out alternative break program.

“Sonia honors and uplifts the experiences of those around her,” said one of those nominating her for the Sullivan Award. The nominator added that Kinkhabwala has “a special skill for seeing into places of disconnection and finding authentic and compassionate ways to soothe hurting hearts and restore broken bonds.”

“Grace,” “reflectiveness,” “gratitude” and “active love” were terms used to describe Kinkhabwala. “She definitely creates community wherever she goes,” one professor said.

This article has been adapted from two press releases appearing here and here on the William & Mary website.